Stories included a single mother of two children whose rent has more than tripled in 15 years, a business owner who is moving for the 10th time in six years and workers in Centennial who wish they could live in the city but cannot afford it.

A single mother of two children whose rent has more than tripled in 15 years, a business owner who is moving for the 10th time in six years and workers in Centennial who wish they could live in the city but cannot afford it — these are the stories highlighted in a video presented to the Centennial City Council on July 11.

The approximately nine-minute video, created by the city’s summer interns, features testimonials of seven people who either work and/or live in Centennial. Each person was asked questions about what their housing experience in Centennial has been like, how they would like Centennial to look in the future and what housing types would be the most conducive to their needs.

One of the stories featured in the video is that of Erica Hoffman, a single mother of two children and a manager of 303 Coffee Co. who has lived in Centennial for about 15 years. She said she loves being in Centennial. Her only non-positive experience has been the increased cost of living, she said. At least half of her income goes toward housing costs.

“Fifteen years ago, for instance, I was paying less than $600 a month for rent, and now we’re close to $2,000,” Hoffman said. “Over the past 15 years, while my income has possibly doubled, the cost of living here for me has more than tripled.”

Affording to pay rent was also an issue for Marshelle Johnston, the owner of MJ Fit, located at 6858 S. Yosemite St. She first moved to Centennial about six years ago and has since moved within the Denver area about nine times. In a few weeks, she will be moving for a 10th time.

“Centennial’s always been my hub. However, it is very unaffordable for many,” Johnston said in the video. “As, like, an adult woman who owns a business and is doing progressive things with my life, to only be able to afford, like, a bedroom in someone’s basement is a problem.”

The video also featured stories of people who work in Centennial but live elsewhere, such as Kashala Grant, a life enrichment associate at Someren Glen. Currently residing in Aurora, Grant said Centennial is a beautiful area but she wishes it were cheaper.

When asked which housing option would be most conducive to the needs of Centennial, Salvador Ortiz, an investor, former president of a homeowners association and a homeowner in Centennial, said an apartment or flat-type structure similar to those that are in Europe, like those in Paris and Madrid, could be beneficial.

“I would debate anybody about how those people’s lifestyles and their community is flourishing in those type of cities where they live in high-density areas,” he said. “A lot of times people, especially in this country, scoff at apartments because of thin walls, but there’s a way to be able to build some type of structures that give some type of dignified living and that are high-density areas that offer amenities.”

Ortiz said the idea that everyone needs to have a single-family structure is not conducive for the challenging environment Centennial is going through. He said there are a lot of things the city can do if it builds upwards instead of outwards, which requires more roads and infrastructure to be built.

Others, such as Hannah Guy, a certified nursing assistant who works in Centennial and lives in Englewood, said she wants privacy and there is a lack of space in many apartment and townhome developments. However, she said Centennial’s cost of living is too high for her to live there.

The City of Centennial had five summer interns this year who worked on housing outreach for seven weeks. The internship is in partnership with the University of North Carolina Morehead-Cain Scholarship Foundation, said Melanie Ward, Centennial’s manager of development foresight and infrastructure readiness.

While participation in the partnership is free to the City of Centennial, the scholars received a cost-of-living stipend from the Morehead-Cain Foundation to cover lodging and food in the Denver area.

Finding the right project for the intern team is nuanced, Ward said, because the city looks for something that interns can do that is meaningful yet accomplishable in seven weeks. Having students work on housing outreach fit the criteria, she said.

Developing the video was one of several efforts the interns did during their internship. The students also conducted preliminary research, attended some of the working group meetings for the city’s housing study and met with city departments to discuss how housing intersects with other community sectors, said Kyle Lumsden, one of the summer interns, during the July 11 meeting.

“All this led us to our goal, which is to assist in driving empathy within the community and to also work on diversifying housing stories in Centennial,” said Lumsden.

When it came time to conduct interviews for the video about housing stories, the interns aimed to connect with people from a variety of religious groups, occupations and racial and ethnic backgrounds, said intern Laura Saavedra Forero.

“These are communities that are historically and currently underrepresented, especially in governmental spheres. And that’s why we were very intentional about wanting to reach out to them,” Saavedra Forero said. She said she hopes the city will continue to make sure these voices are included as the housing study continues.

Intern Hudson Shank said the team created a full comprehensive summer social report that will be available to city council. The report lists out the data the interns found through interviewing community members at the District 1 and District 2 summer socials. 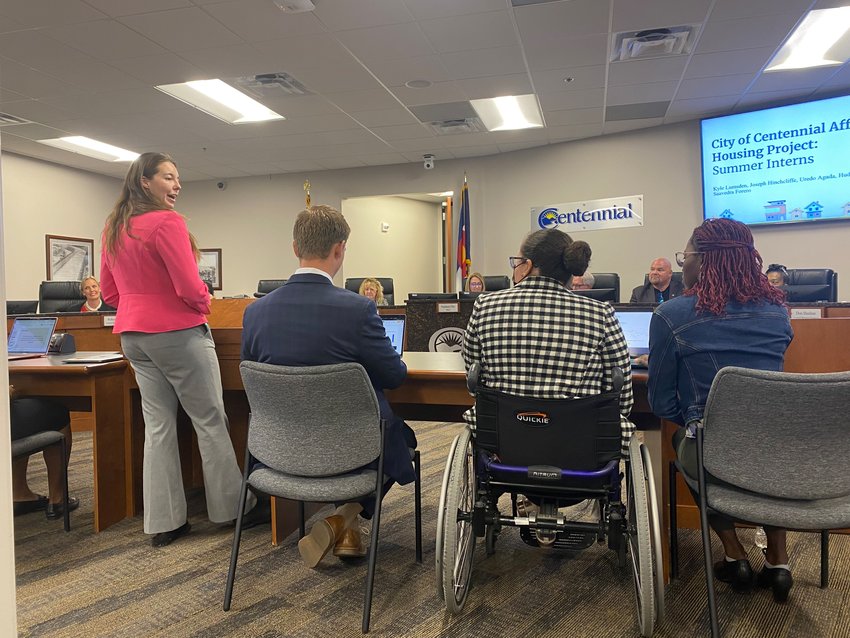 Melanie Ward and interns for the City of Centennial presenting to city council on July 11, 2022, at Centennial Civic Center. From left to right: Melanie Ward, Hudson Shank, Laura Saavedra Forero and Uredo Agada.

Council members reflect on need for action for future generations

Following the video presentation, members of city council expressed gratitude to the interns for their hard work and for creating the video.

“Thank you for doing this. It was a very engaging way to have a presentation about our housing study. I appreciated that you made good attempts to reach out to different people here in the city, as well as people who work here in the city but don’t live here because that’s a perspective we don’t often get to hear,” said Councilmember Candace Moon.

Councilmember Mike Sutherland said the interns’ work provided a great foundation and illustrates some of the challenges Centennial faces.

“I didn’t hear anybody oppose density big time, and I think these people all have an appreciation for the fact that dense housing tends to be more affordable,” Sutherland said.

Councilmember Tammy Maurer said the video is a great tool for her when having conversations with people about housing challenges in the community in the future.

“I think the conversations that you had with these people really showed the opportunity that we have, and what we need to do as visionaries to move this city forward. Because we need people like you to move back into our city,” said Councilmember Christine Sweetland.

Robyn Carnes said she moved into Centennial when it was affordable about 19 years ago, and seeing the video was bittersweet because it showed how desirable the community is to some people and reminded her to be grateful for what she has.

“A lot of people can’t live here but want to — so, again, the vision for, ‘How do we continue passing the baton and bringing in the next generation?’” Carnes said.

Councilmember Richard Holt agreed with Carnes and said he moved into the area about 20 years ago, and if he was the same age as the interns, he would “have absolutely no clue” how to make the moves to live in Centennial.

“I’ll echo the same sentiments,” said Mayor Stephanie Piko, pointing out that Centennial is only 20 years old. “What we’ve done over the last 20 years is create a desirable community for people to want to live in, and the ramifications of that is the affordability factor that isn’t here.”

Loneliness may play early role in Alzheimer’s, Colorado researcher says
Dr. Rebecca Mullen had been seeing a patient for about four years, and she noticed he was becoming more and more lonely — he would come to see her more often just for a social connection. Then, he started to experience a rapid decline in his memory and was diagnosed with Alzheimer’s disease.

Acosta, Brighton police commander, dies
Former Brighton Police Department Cmdr. Frank Acosta passed away of natural causes, the city announced Sept. 23. Acosta joined the police department in February 2000. Before that, he was a state …
Classes continue at Fort Lupton High School despite circulated threats
The Weld Re-8 School District became the latest in a series of school districts to face rumored threats to school safety.   In a district website post Sept. 23, Weld Re-8 Superintendent …
State introduces the new Office of Civil and Forensic Mental Health
The Colorado Department of Human Services (CDHS) announced that the Office of Civil and Forensic Mental Health (OCFMH) is the new name for the former Office of Behavioral Health (OBH).