JC Helmstaedter’s affinity for the neighborhood surrounding South Broadway and Evans Avenue runs deep. The co-owner of EMW Carpets and Furniture started working in the family business in elementary school; sweeping, stacking and cleaning alongside his three older siblings under the direction of their father.

“Our family goes way back,” he says, recounting an EMW history that began with his grandparents in 1923. “The EMW is my grandmother, Elizabeth Mary Wagenblast’s, initials. They lived in a little house on Broadway and people would ring the bell to look at the furniture on their front porch.” 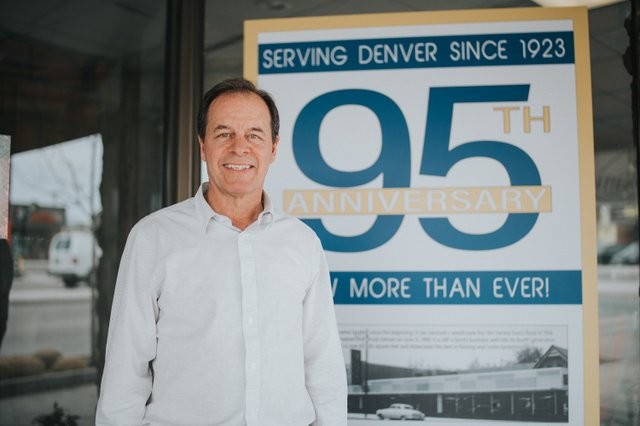 An athletic child, Helmstaedter skied for the Winter Park ski team and swam competitively at Cherry Creek High. He earned a swimming scholarship to CSU, joined the college ski club and ended up skiing competitively there. Returning to Denver to work in the family business seemed like the next natural step.

“At the time, we probably had seven family members working there, including my grandmother,” he says. “I started as part of the sales force with my dad teaching me more of the buying end.” Today, JC and Eric are 50-50 owners of the 25-employee Denver institution (the brothers purchased the company in the mid-1990s), with Eric handling flooring and JC the furniture. Eric’s wife and son also work at EMW.

“Coming in right out of college, I was the youngest employee and the sales force was primarily elderly men, but I learned so much from them,” Helmstaedter recalls. “Everything I’ve learned in my life has come through building relationships with people. The most vivid memories I have—whether from outside activities or business—came through relationships. I started getting involved in the community back then and what I’ve learned is, that even in the realm of government, people are just people. It upsets me when I hear someone who has never gotten involved complaining about government. They don’t realize it’s just dealing with human beings like everything else.”

Long active in Overland Park Neighborhood Association (OPNA), Helmstaedter’s major involvement in the community began in the early 1990s when approached to join the planning board for the Evans Light Rail Station.

“I met City Council members and city engineers through attending those meetings,” he says. “We had to do a lot of research and future planning. As a business member of OPNA, I knew that group really well. We actually walked all the streets within a half mile of the site to make recommendations.”

When voters passed a bond to allow the City of Denver to improve the Broadway corridor from I-25 to Yale, Helmstaedter became directly involved in the long-term, phased-in, project. “There was some land being taken from us through eminent domain,” he says. “So, I was back in communication with the powers that be. There were three districts created along South Broadway and the mayor appointed me president of Phase III—from Iowa to Iliff—the last one to be built and equal to the other two sections put together. I’ve been working on that for a long time.”

Project improvements along South Broadway included removing all power lines to create an unobstructed view, increasing storm drainage from 18 to 60 inches, replacing water lines and creating a more pedestrian-friendly streetscape and more secure street parking. “One of the things they really missed and are still trying to solve is addressing bicycle use,” Helmstaedter says. “There’s no continuous corridor. You ride five blocks and then it ends, and then a quarter mile later you can ride another few blocks. On the section that’s north of I-25, they took the parking lane out and put a bike lane on the inside, but I don’t think it works well. I think it would work much better on a street like Acoma where there’s a big development going in and they could tie the bike lane into the Platte River bike path.”

Continuing work on what’s now called the South Broadway Local Maintenance District has evolved to another level, Helmstaedter says. “I’ve gotten to know a lot of people in other businesses on the other two South Broadway boards. We work really well together and bid on some projects together. Right now we’re discussing creating something called a Business Improvement District that’s a little different from the current local maintenance districts. There’s a petition drawn up that would engulf the three local maintenance districts and then expand from Broadway west.”

Helmstaedter says becoming a Business Improvement District provides a lot more latitude for enhancing neighborhood identity. “We can improve parking and enhance transportation services and, as an organized group, we can petition for matching funds from the city to help pay for improvements,” he says. “The Centro group that created the RiNo District has been helping us do this. We intend to have enough petitions by spring and then it goes to City Council for approval and, if approved, to a vote.”

Helmstaedter grows animated when speaking about the new enterprise arising in that very neighborhood west of Broadway (where his family owns properties), and the potential for unique partnerships. “We have these great distilleries and there’s a group of really fascinating guys that graduated from the School of Mines and opened Declaration Brewing on South Cherokee Street,” he says. “One of the Business Improvement District’s goals is to offer free transportation in the neighborhood. We’re brainstorming with them about developing transportation options.”

His son, an Art Institute graduate, has formed a co-op working environment for photographers. “It’s evolved quite a bit, moving more toward video production,” Helmstaedter says. “We have another building at Florida and South Broadway that my grandparents bought in 1930 and my parents actually lived in as an apartment. We’ve converted the upstairs apartments into artist galleries and opened up the main floor, where the gallery Brushstrokes has moved in. There’s a mural on the north side of the building by Patrick Kane McGregor you can see (when) driving down Broadway.” 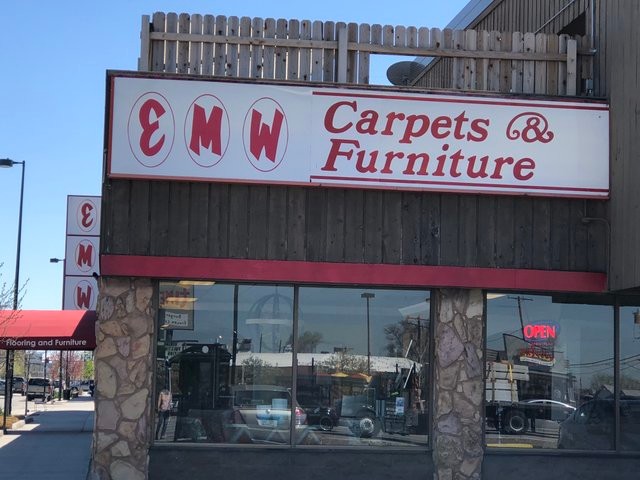 Other exciting new ventures in the area include the upcoming Grandoozy Festival to be held at the Overland Park Golf Course this fall. “It will have five stages and include comedy and big headliners, but the idea is to highlight the uniqueness of our neighborhood by including local artists, breweries and restaurants,” Helmstaedter explains. “It will give local entertainers national exposure. It’s been very exciting to serve on the oversight committee for that.”

The downside to all this growth? “Well, EMW is celebrating 95 years in business and we’re on a three-and-a-half-acre piece of land that’s worth more than the value of the business,” he says, laughing. “The houses behind the store are nearing 100 years old. It would be great to do a development there as a center between the I-25 development and Englewood’s vision. So we’re spending a lot of time looking at creating something really dynamic, not based on greed but on a better use for the whole block that would include apartments but also 18-hour city usage with coffee shops, brewpubs and a niche grocery store. And we could look at tax incentives to include affordable housing. We also have a fourth generation at EMW with ambitions of continuing. How great would it be to have a new building with covered parking for our customers and the benefits of new, energy-efficient construction to give EMW a presence in the neighborhood for the next 100 years?”

Author Susan Dugan’s wide range of work includes newspaper and magazine articles, personal essays and fiction. An active volunteer in local schools, she has taught creative writing and brought authors into classrooms. If you know a member of our community who is contributing in extraordinary ways and might make a good subject for this column, email Susan at sadugan@gmail.com.

Loneliness may play early role in Alzheimer’s, Colorado researcher says
Dr. Rebecca Mullen had been seeing a patient for about four years, and she noticed he was becoming more and more lonely — he would come to see her more often just for a social connection. Then, he started to experience a rapid decline in his memory and was diagnosed with Alzheimer’s disease.

Acosta, Brighton police commander, dies
Former Brighton Police Department Cmdr. Frank Acosta passed away of natural causes, the city announced Sept. 23. Acosta joined the police department in February 2000. Before that, he was a state …
Classes continue at Fort Lupton High School despite circulated threats
The Weld Re-8 School District became the latest in a series of school districts to face rumored threats to school safety.   In a district website post Sept. 23, Weld Re-8 Superintendent …
State introduces the new Office of Civil and Forensic Mental Health
The Colorado Department of Human Services (CDHS) announced that the Office of Civil and Forensic Mental Health (OCFMH) is the new name for the former Office of Behavioral Health (OBH).