As the opposing team grabs the puck and skates down the ice in a breakaway, parents and fans of the Arapahoe Warriors 10U Yellow team, or Golden Eagles, take a collective breath. As the goalie falls on the puck to secure the save, parents scream, “Good job, Emma.”

As the opposing team grabs the puck and skates down the ice in a breakaway, parents and fans of the Arapahoe Warriors 10U Yellow team, or Golden Eagles, take a collective breath. As the goalie falls on the puck to secure the save, parents scream, “Good job, Emma.”

While those same parents are there to cheer on their own children, Emma Preston has quickly become a crowd favorite in the 2022-23 season.

While one could argue Emma may be one of the smallest members of the team, no one doubts she stands up to the pressure of having the biggest job on the ice as the lone goalie.

Emma is the lone girl on the 10-and-under team that is part of the Arapahoe Warriors recreational hockey program, which plays teams all over the Front Range.

"As a coaching staff, I’m not sure we’ve seen a goalie at this age level that has quicker lateral movement across the goalie crease," said Head Coach Christopher Castelli. "Her ability to shuffle from one side of the net to the other in the butterfly position is second to none."

For the Eagles, many of the players are in their first year of competitive play, including Emma.

Emma said she got into hockey by watching the sport with her dad, noting that her favorite player is Marc-André Fleury, the goalie for the Minnesota Wild in the NHL.

Emma said watching Fleury made her want to try her hand at being goalie. She started training and joined the Eagles for a season that hasn’t always been easy.

“I really like getting out there and stopping the shots,” Emma said. “It’s hard but I want to keep working.” 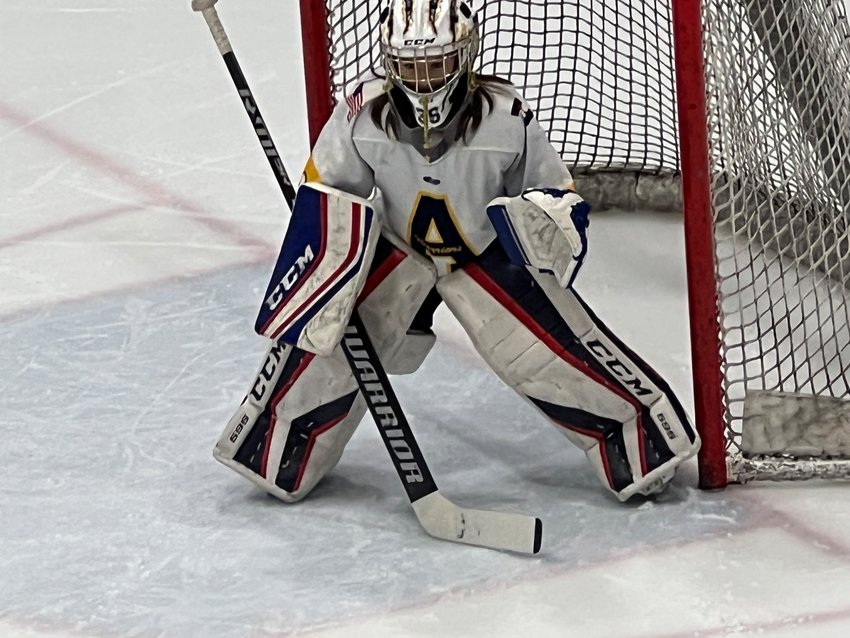 Emma Preston prepares as opponents head her way in a 2022-23 season game.
At the start of the season as the new young team was coming together, many games fell on Emma’s shoulders. The Eagles faced some tough, lopsided losses in the early going.

“It can be hard, especially when the other team gets on a breakaway,” Emma said. “As the team has gotten better it feels good because there is less pressure on me.”

"During game intermissions, we have one-on-one
chats about clearing the mind and having a positive thought process when she’s in the net," he said." In fact, she writes motivational quotes on her goalie pads to remind herself that we as a team believe in her and that she believes in herself."

As the Eagles have improved on defense and as shooters Dennis Lisunov, who leads the team with 43 goals, and Lewis Chan started getting in a rhythm on their respective lines, the team is starting to win more games, even the close ones that would slip away in the final seconds early in the season.

A season momentum builder came during the Arvada tournament in December. In a tough game, the Eagles pushed the score to a 3-3 tie at the end of regulation. For tournament placement, the game cannot end in a tie, requiring a shootout. 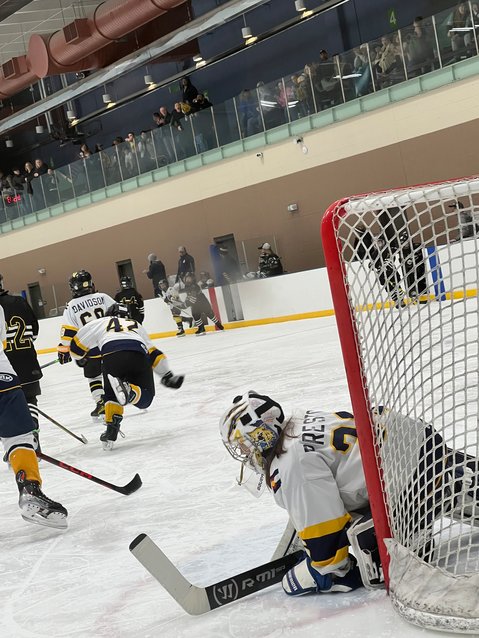 Emma Preston makes a big stop during a tournament game in December
Emma said she got a little stressed before the shootout. The Eagles started with three shots, with two of the players hitting it in to relieve some of Emma’s pressure. However, after blocking one shot, Emma missed two to keep the game tied.

In the second shootout, each team got one shot. Chan, who scored in the first shootout, snuck it in to put the Eagles ahead again.

Emma said as an opposing player pushed the puck toward her, she just took position and watched the puck push to her glove, saving the goal and winning the game. 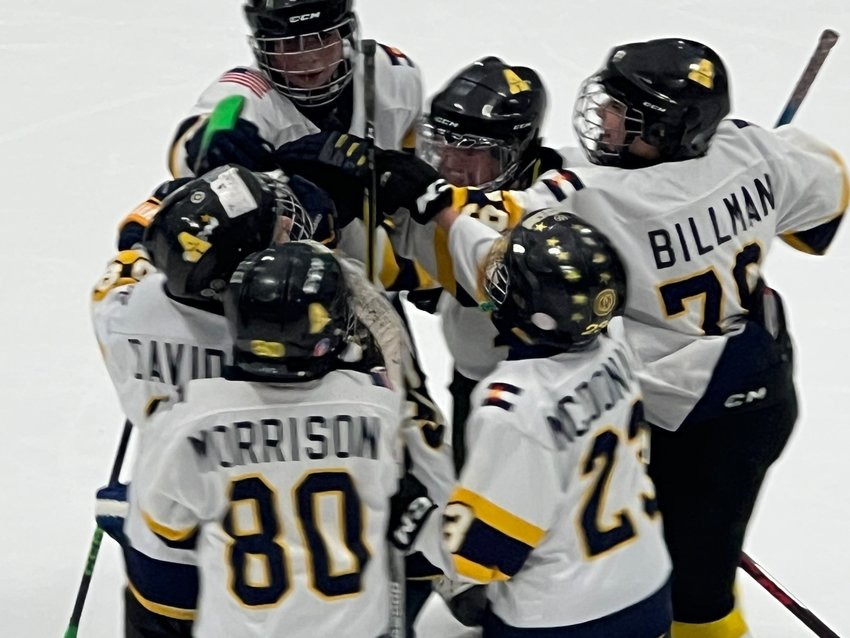 Goalie Emma Preston is swarmed by team members after securing a tight victory in December
As she made the save and the crowd cheered, as is customary after each game, all of the Eagles players ran to hit Emma on her helmet in a big mob.

"As a team, we have preached about being one big hockey family, Castelli said. "Emma has the ongoing support of our players as well as the parents in the stands. I’ve had parents and opposing coaches come up to me after the game lauding her performance in the net. Her fandom among the team parents has become pretty special. The Emma chants with the blue and yellow pom-poms waving in the air after every save is an amazing site to see."

This December victory was not only big for Emma, but she said it was also big for her team as she’s had a great view from the goalie box in watching the Eagles grow and improve.

In Fort Collins in early January, Emma and the Eagles again shined. After a rough first round where they lost a game they were expected to win, the team bounced back for two strong victories.

In the second round, Emma was on her game, allowing two goals on 26 shots, giving the Eagles a 3-2 victory. 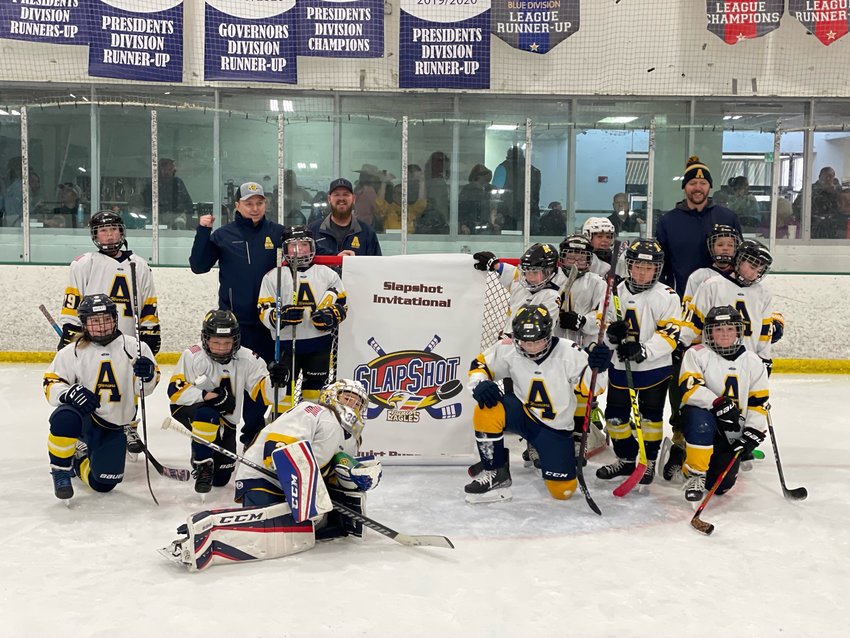 The Arapahoe Warriors 10U Yellow team poses after securing a second-place finish in the Slap Shot Tournament in Fort Collins
The Eagles made it to the championship round where they lost a tight game 4-3.

In a game where the Eagles led 3-0, a tough second period changed momentum, starting with a controversial call where referees ruled a tripping incident was flagrant. Instead of a penalty box punishment, the referee allowed the other team to take a free penalty shot. Emma came up short, as the goal slid past her leg.

Besides her strong play and the support earned from both her teammates and fans, Emma is also one of the most respectful players on the ice, even in a game where a referee call changed the course of play.

After each game, win or lose, Emma can be seen shaking the referees’ hands. 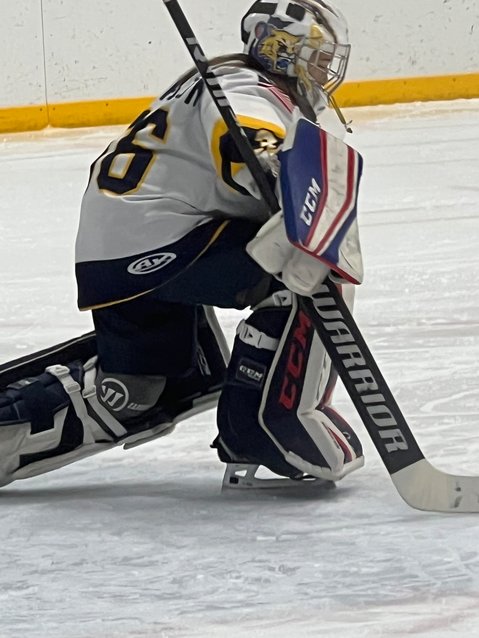 Emma Preston's ultimate goal is to keep learning and eventually carry a team to a championship
Ultimately, as Emma continues playing and learning, the young player said she wants to eventually be a part of a championship team.

“I just want to keep doing this and be the best I can be for my team,” she said.

The Eagles will continue their season through February.

" As the season progresses, (Emma) continues to close-out games for us," Castelli said. "Another thing that has led to her growing confidence is the hard work the team puts into our practices. That team bond and unity has transferred to the ice."

Documenting Denver in the '80s and '90s
He’s been legally blind since the 1990s. Weinberg uses the latest technology to make the most of the little vision he has remaining to take photos, to get around on his own and to help other people …

A history lesson in a film
The creators of a new film that will premiere this spring hope it will help the state’s residents and leaders better understand what the state needs to thrive in the future. Set to premiere on …

‘If the calendar was open, I always said yes’
Back in May, longtime CBS Colorado — KCNC-TV, Channel 4 — news anchor Jim Benemann announced his retirement, bringing a close to his 44 years in TV news, including 36 years in the Denver market. …

It’s the year of the rabbit
Colorado State University doctoral student Xinyi “Katya” Zhou grew up celebrating Lunar New Year in her hometown of Beijing, China. Each year to celebrate, Zhou’s family would prepare an …