The distinctive gold capital letters high on the front and side of a corner Victorian house generically identify the business: “Violin Maker.”

This nondescript signage is an invitation to the past. Open the front gate, go up the flagstone walk to a couple weathered steps, enter the front door and there to the left is the small, striking showroom of Rock T. Eggen Violins, Inc. 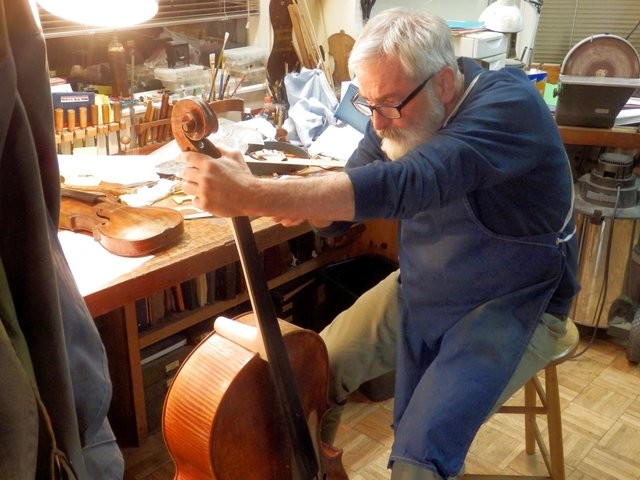 Violin maker Rock T. Eggen puts elbow grease into his work on the neck of a cello in his Denver luthier shop. Photo by Electa Draper.

Violas hang behind one counter. Two glass cases, one filled with violins, the other with cellos, are on either side of a decorative fireplace.

“Sometimes people feel like they’re stepping back in time into a sort of Old World violin shop,” Eggen said. “Often, they’ll ask me how old is this building, and they think this is the perfect setting for a violin shop.”

One block from busy Sixth Avenue and the Denver Health Medical Center, the shop is an urban refuge at 150 W. Fifth Avenue. Eggen moved to Denver in 1980 to escape the heat and humidity of Miami, where he was working, and opened a violin shop on South Broadway, renting a small house. He bought the Victorian, which Eggen said was built in 1884, and moved his business there in 1990.

Eggen is a craftsman, whose work is wonderfully linked to the distant past. He uses finger planes, thumb planes, chisels, gauges, twist drills and various hand saws that are very similar to the tools Andrea Amati, the first renowned violin maker, used around 1560. It gives Eggen a timeless pleasure.

Eggen is from Salt Lake City, where he began learning about violin making and repair. A pivotal career move came when Eggen heard of an opening in a violin shop in Miami owned by Harry Duffy. Eggen was invited to work in Duffy’s workshop for a week, a tryout that Eggen said turned into a stay of about two years and gave him the opportunity to work often on high-end instruments such as Stradivaris and Guarneris.

“That’s where the true learning is, having access to antique instruments and being able to study them,” Eggen said. “You can learn a lot by taking the top off a great instrument and just looking at how the work was done inside. Just seeing what the thicknesses are like and really being able to examine the varnish. Using magnifying lenses … to look at the varnishes, you really get to see what great work looks like. And that’s an inspiration.”

With his white hair and beard, Eggen, 66, looks professorial, particularly in a gray auto mechanics coat he wears on cooler days when the shop is a bit chilly. The coat protects his clothes from the drops of varnish and other substances that might spill as he works in the area behind the showroom.

Eggen has had several apprentices. David Waldman, the current one, works two days a week and has been with Eggen about a year and a half. Waldman, 47, a professional violinst, said of his time with Eggen, “It’s been like going to college for learning how to do this stuff, which I’ve always found fascinating and just didn’t know anything about.”

The repair of cellos, violins and violas provides what Eggen calls “sort of an OK income,” but instrument sales are “an important part of having a shop,” because the sale of one expensive instrument can buoy the annual bottom line. The instruments sold are older ones that Eggen has restored and some new ones.

“Even the new instruments, we find that usually we have to do a little work, too,” he said. “New instruments are often not set up very well. A lot of times we have to throw the bridge away and make a new bridge, because they’re so poorly done.”

Eggen also sells accessories such as strings, chin rests, tail pieces, fine tuners, humidifiers, mutes and resin. He said sales of those items have declined as more people have used the internet to buy them.

“A lot of times people have an instrument,” Eggen said, “they’ve played it maybe most of their lives, and they come in and say it’s not sounding (right). Bringing it back to the way they remembered it, I feel we’re pretty good at that.”

Eggen has reached a point where he thinks about retirement. Making new instruments at home and consigning them to a shop has a certain appeal when it comes to flow, focus and uninterrupted work, albeit with one looming drawback.

“Sometimes I think if I did retire, set up a business where I’m working on my own, not seeing customers, I could probably get a lot more work done,” Eggen said. “But I really do feel like I’d miss seeing the customers, because the people that come to a violin shop are really nice people.”

A day for those who 'answered the call'
Doug Robinson worked in the World Trade Center in the 1980s and 1990s, as a young hotshot at Morgan Stanley Dean Witter. Before moving west to Denver, he got to know Rick Rescorla, the company's head …
New details emerge in case against former Broncos player Cody Latimer
On the night Cory Latimer was arrested by the Douglas County Sheriff’s Office, the former Broncos player had become angry after he saw a man at a poker party sitting “uncomfortably …
Parker councilmember out of town since March, away indefinitely (but not resigning)
A Parker town councilmember has been out of the state since March and says she plans to be away until the COVID-19 pandemic is over.
Military academy and ROTC informational Zoom on Sept. 15
On Sept. 15, between 5-7 p.m. Mountain time, the five Service Academies (U.S. Air Force Academy, U.S. Naval Academy, U.S. Military Academy, U.S. Merchant Marine Academy, U.S. Coast Guard Academy) and …

Douglas County high school pitcher thrilled to be chosen by Rockies
Case Williams claims the decision he faced wasn’t tough. Williams, a Douglas County High School right-handed pitcher, was the fourth-round pick and the 110th overall selection by the Colorado …